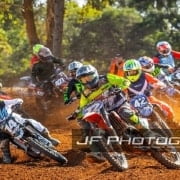 Many times over the past decade, Radio 6PR’s Millsy and Regan Duffy’s paths have crossed, usually over jokes at trophy presentations-some of which have been memorable to audience members-the WA Motocross Community.

Leading up to the MXoN we organised for a very chuffed Millsy to catch up with Duffy prior to heading overseas to the “Olympics of Motocross”.  Sadly before the interview could take place tragedy struck the WA motocross community with the passing of one of Regan’s childhood mates, Rhys Burnett.

Thank you Millsy, Basil and News Talk 6PR 882 for sensitively supporting our sport and the motocross community once again.

Take 5 minutes, have a read and then listen to the podcast interview (Courtesy of 6PR) -the strength and character of 17 year old champion, Regan Duffy, is to be admired.

A WA Motocross rider is heading to Amsterdam to represent Australia at the World Championships next week, but it was only days ago he lost a fellow rider and good friend after a crash on the track.

West Australian teenager Regan Duffy will make his appearance on the world stage.

“It’s massive, it’s the Olympics of motocross and for me to get chosen at 17 to represent my country, it’s pretty crazy actually,” Duffy told 6PR Breakfast.

But it will be a bitter sweet journey for him after his childhood friend, Rhys “Roo” Burnett, died after an accident during a competition last weekend.

“He was always smiling, always joking and now I’m just going to continue on for Roo,” he told Steve and Baz.