Think motorsport, any motorsport. What do you love about it most of all? I’ll bet it’s that the thrill of witnessing a victory means a torturous wait with bated breath as seconds, minutes and laps pass. In less than one hard gasp it can all go horribly wrong. In MotoGP, in Motocross, in Speedway and in Enduro we all want our heroes to get across the line, but what if they don’t? What if they hit the wall? It is their temptation of fate that keeps us on the edge of our seat. We don’t want it to happen, but it might. And if it does, to bear witness to it triggers responses within us that are difficult to rationalise. You may not want to admit it, but you are lying if you are denying that you enjoy the thrill and spectacle of a massive crash. At the same time, however, you are desperately willing the rider to walk away from the apocalyptic cloud of matt black and ice white smoke that fills your 72-inch flat screen.

Well relax! The X Trial Australian Championship is here. During X Trial it all goes horribly wrong very frequently and the riders are OK with that. And if they’re OK with that, then so should you be. So, don’t torture yourself. Just sit back and enjoy your icy-cold beverage and tasty hot dog in the comfort of your grandstand seat and enjoy watching the chaos that is X Trial unfold so close in front of you that you cold almost reach out and touch it.

The differences between X Trial and every other motorsport are many. Most racers want to get around the circuit as fast as they can avoiding all the obstacles, such as the sand traps, tyre walls and concrete barriers. X Trial riders also like to get around their circuit in good time (as they, like all racers, are on the clock). But, on an X Trial circuit, the obstacles are the circuit and there is no avoiding them. And that has consequences. Crashes are not an exception to the norm; they are the norm. Fortunately for you, the spectator, X Trial riders are not like normal human beings. They are more like cats. Somehow, the always seem to land on their feet and if the crash to the base of a seemingly insurmountable obstacle, they just get up and go at it again. They are a determined lot and for the likes of six-times Australian Trials champion and winner of the Australian X Trial Championship in 2018 Kyle Middleton, there seems to be no such thing as a ‘too hard basket’, up to and including negotiating the three-meter chasm between the massive Haulpack tyres on the Titan Tyres section of the Australian X Trial event. 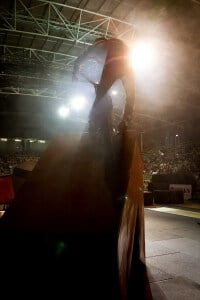 Founder and course designer Neil Price openly admits that there are some obstacles on the circuit that potentially can’t be negotiated if the temperature and humidity is not quite right on the night. But try telling that to Chris Bayles (TAS), brothers Colin and Kevin Zarczynski (NSW) and WA boys, Craig Austin and Mark Atherton, all of whom (and Neil included) are not at all comfortable with the concept of ‘not quite getting around seven sections’ on time and in shape. These guys have every intention of giving it everything they have got again and again until their pass the impassable, clear the incredible, and ascend the impossible.

So, if you DON’T know what trials is about you have to check out the 2019 X Trial Australian Championship out this Saturday the 20th of July at HBF Stadium in Western Australia or on the 27th of July at WIN Entertainment Centre in Wollongong, NSW. If you DO know what trials is about, then you have to check the 2019 X Trial Australian Championship out to see just how twisted this motor sport can be. Jump onto this page for all the ticket details and all the other info you could possibly need, want or desire http://ausxtrial.com.au/ or follow the feed on Instagram (@ausxtrial) and Facebook (X Trial).